Menu
← view all items prev next

In the near future the human population will not only continue to grow rapidly, an increasing number of us will live in cities. It is estimated that by the year 2050, 70 percent of the world’s people will be city dwellers. What will not change, is the fact that all these people, like all people before them, shall eventually die. As the living population needs space to live, our beloved deceased will need more and more space to rest. As our cities continue to grow denser the need for green and meaningful places inside these cities will grow with them. Updating our burial tradition might prove to be an opportunity to make the dense city more natural and humane. 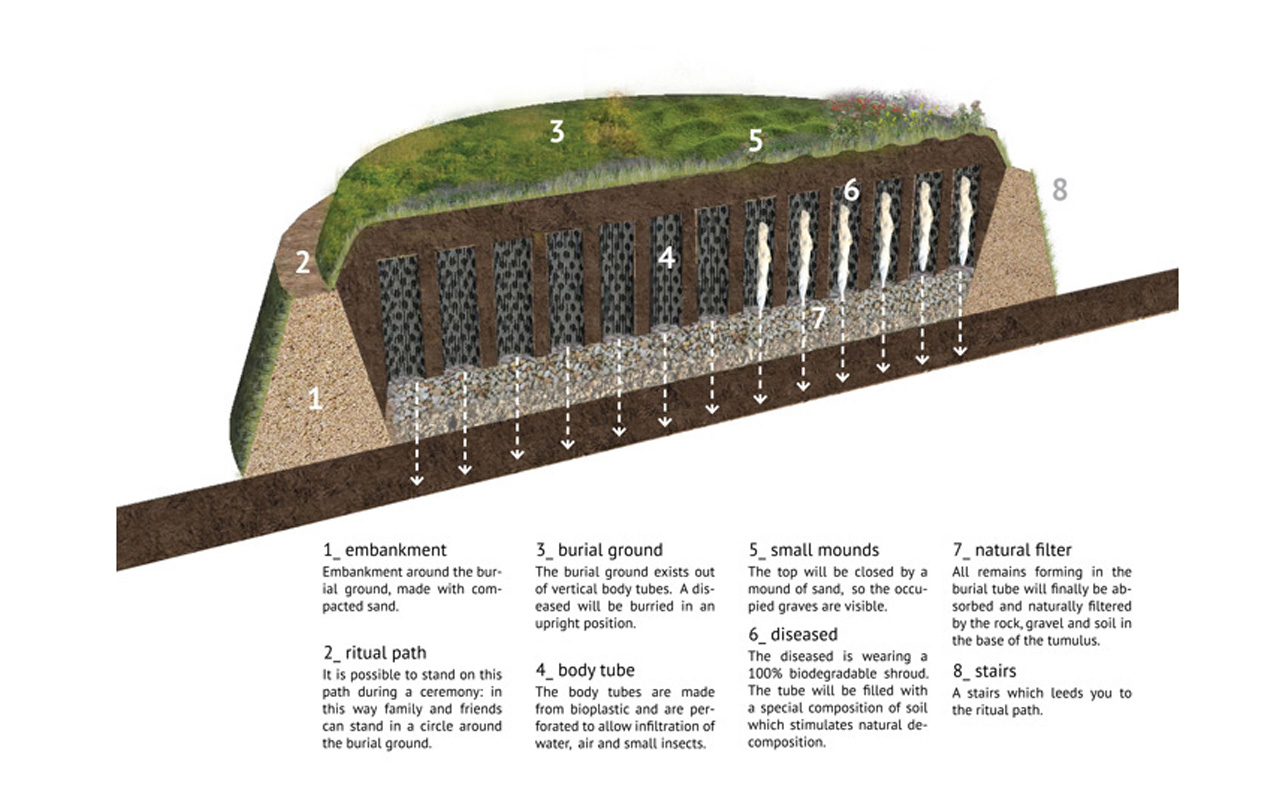 If people in our modern society want to hold on to the tradition of burial, a physical place of remembrance, we will have to think about burial as an integrated part of the city. We could combine the ancient tradition of tumulus burial with the introduction and/or consolidation of relatively small urban gardens which are easily introduced in dense city grids. Heavenly havens of green tranquillity amidst our dense and rushed cities. This will also be an opportunity to integrate the idea of death into our society which has become increasingly detached from natural processes. With the urban tumulus, death is the making of life.

The urban tumulus is a compact and dense burial ground designed for urban environments. In order to create a controllable burial environment it is placed on top of the original terrain. Making a burial mound also replaces the need for added makings like gravestones, the tumulus itself is a mark in the city. The tumulus is erected by creating a circular embankment in which a natural filter from layered rock,

gravels and sand is made. On this base tubes of perforated non-degradingbioplastic are placed after which the space in between is filled with fertile earth. Each tube is a grave and including sufficient distance is takes less then a square meter.

After the body of a deceased, which is in a biodegradable shroud, has been placed in a grave and a ceremony has taken place, the tube will be filled with a special composition of earth. Because the tumulus is a passively controlled environment we can ensure accelerated natural decomposition. The soil used will be ‘pro biotic’, an abundance of specially selected bacteria and fungi will help avoid unwanted decomposition processes and promote forming healthy nutrients for the environment. Also the soil will have a structure to ensure the right amount of humidity and aeration for total decomposition to take place.
All remains forming in the burial tube will finally be absorbed and naturally filtered by the soil in the base of the tumulus.

This way no unwanted substances will leak from the tumulus while it absorbs all nutrients.
After several generations of burials the absorption capacity of the urban tumulus is depleted. Then the tumulus can be dismantled and the fertile core can be used for a rebuild or fertilisation of other grounds.

Grave to the cradle

The urban tumulus fits within a renewed awareness for local solutions. Finding local answers proves to be more sustainable, both in a society as in an ecological sense. It decreases dependance and heightens awareness. Besides being socially relevant, Urban Tumulus also is an extremely energy efficient way to  give our bodily remains back to nature. Both cremation and traditional burial have a considerable environmental impact through the energy used and emissions caused. The tumulus takes no energy but creates fertilized soil and the materials used can be reused almost infinitely. The tumulus is a way to up cycle remains which in some countries are considered chemical waste by law. It takes us from the grave to become a cradle for nature.